skip to main | skip to sidebar

1. The Badman's Daughter by Terry James 2. The Boot Hill Breed by Ned Oaks 3. The Magnificent Mendozas by Ross Morton 4. Dead Man's Trail by Chuck Tyrell 5. Bodie Meets Brand: Two Guns North by Neil Hunter 6. Laramie Davis:High Valley Manhunt by B.S.Dunn 7. Comes The Reaper by B.J.Holmes 8. Return To Silver Creek by Chuck Tyrell 7. Redemption Road by J.C.Hulsey 8. Bodie 1: Trackdown by Neil Hunter 9. Iron Eyes by Rory Black I don't seem to have read many westerns over the course of the year. Must do better as my Kindle is loaded with a load of tales that have yet to see the light of day. The mix come from both Piccadilly Publishing who have picked up the Neil Hunter series Bodie. The original series lasted for six books but, fortunately,Neil Hunter has brought Bodie back as well as teaming him up with his other creation Jason Brand. Piccadilly Publishing has established itself as the home of the series western.
Posted by Jack at 18:05 No comments:

FFB: KICK A TIN CAN by Dianne Doubtfire 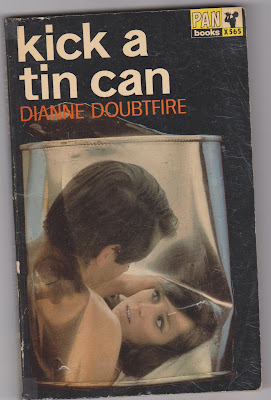 The opening line to this 1964 novel rings so true to me.

'Wilfred Kittering's desk was in the back row, which made it easy for him to read Lolita during Religious Instruction.' In my case it was 'Lady Chatterley's Lover'.

Wilfred is a fifteen year old living with his widowed mother who runs a sweetshop in London's East End.
Every weekend, before he died, father and son would go for walks in the countryside. It is something that Wilfred misses. Until the day he decides to catch the Green Line bus and venture out on his own.
He walks along the river where he meets public schoolboy Andrew Rose-Pearson. They form a friendship and end up falling in the water. He accompanies Andrew home where he meets his mother, Carol, who is thirty four and very attentive to Wilfred who returns home wearing some of Carol's husband's clothes.
Back in the East End Wilfred begins a new relationship with a girl his own age, Jill Dennison. A doomed relationship when he returns the clothes to Carol.

Dianne Doubtfire pushes boundaries in this novel. Growing pains are there and Carol latches on to the fact that Wilfred yearns to become a writer. She indulges him by giving him a place to write and buys him a typewriter.
Carol is a well drawn picture of the deperate housewife. No husband and a son who only comes home in the holidays. Wilfred alleviates her boredom and fills her loneliness. On the other hand Wilfred comes of age too quickly for his own good and finds it difficult to understand when Carol finds someone her own age.

A brilliant novel - though a subject that is rather taboo in this new Victorian era.
Posted by Jack at 00:57 2 comments: 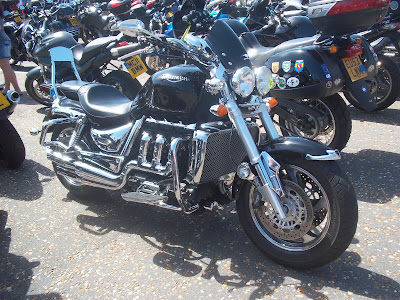 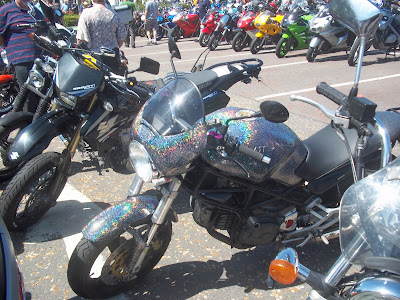 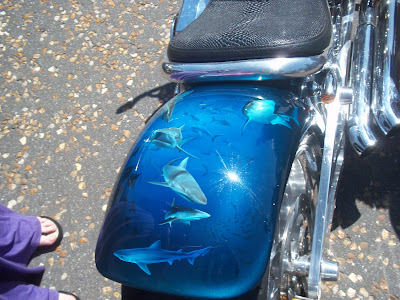 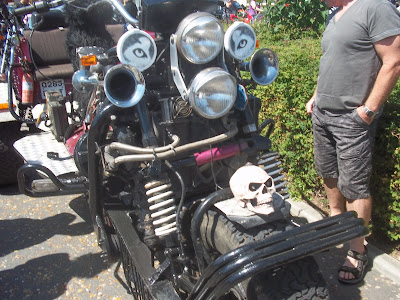 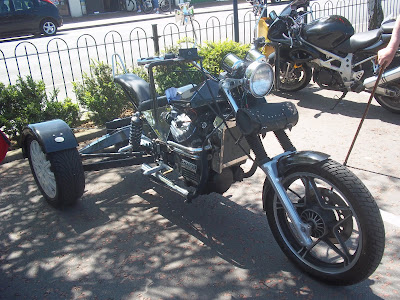 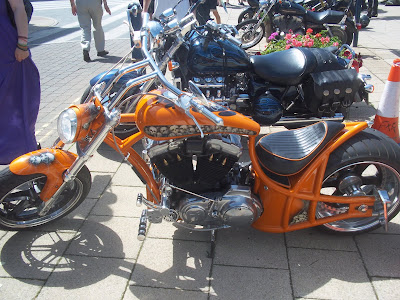 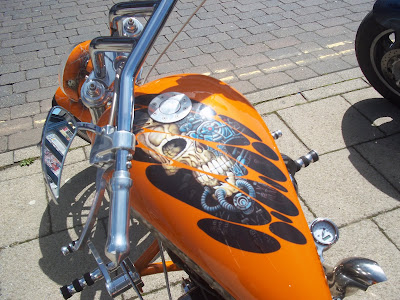 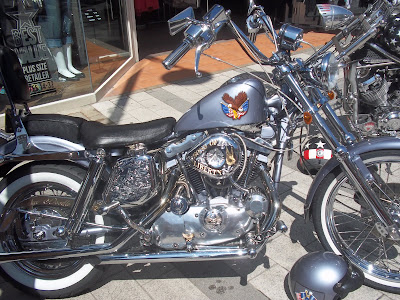 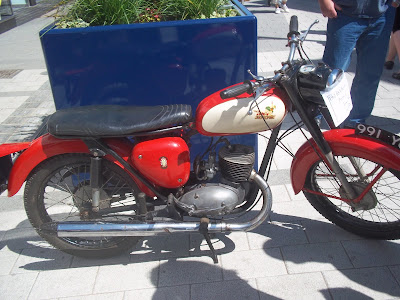 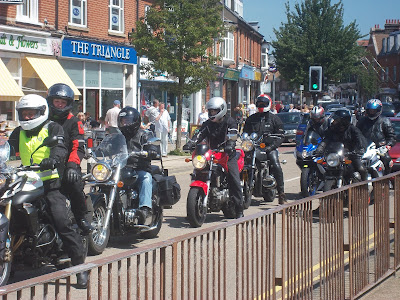 Just a fistful of photos that we took today.
We think that between us we took about 300 photos altogether.

The event was jam packed with stalls for Royal Enfield, Harley Davidson, Triumph, Aprilla and Victory motorcycles. Great support for the Air Ambulance and other emergency services.

SIEGE AT MA-KOUIE by Derrick Wright 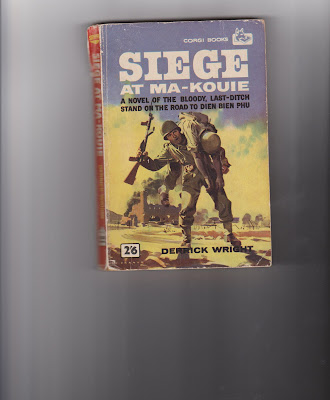 The orders were simple - the road past the fort at Ma-Kouie must be denied to the enemy artillery for five days. Time is essential for planes to bring in reinforcements urgently needed at Dien Bien Phu otherwise all Laos falls to the Viet-Minh.
The problem is that by the time these orders arrive at Captain Renoir's HQ he has just eighteen men left alive. But these men of the French Foreign Legion are a tough bunch and prepared to carry out their orders. After all there is very little choice though the mission is totally suicidal.
The plan is simple.
First destroy the bridge over the Ma-Kouie River.
Second hold the fort for twenty four hours after the enemy arrive.
Third pull back to a grassy knoll where Renoir will place mortar positions.
The fort is placed under the command of Sergeant Steve Brent, a tough uncompromising 'Limey'. With him is the American Corporal Bud Galland who loves hard as he fights; Johnny Hellwig, a young German deserter who becomes a man. Others are memorable like Me'n Fou with a fly tattooed on the end of his nose and Mohaffy the Irish American with a grudge against the sergeant. Then there is the big built Marie with a hatred for the Viet-Nimh who killed her husband and son - a woman determined to go down fighting. And Ly-Lin, a prostitute hopelessly devoted to Bud Galland who stands by his side through thick and thin.

Derrick Wright has written a character driven book about men and war that still stands up today. The reader gets involved with the story and as the numbers begin to dwindle you feel the loss. The battle scenes are well described - in such a way that you can see it happen as though it was a movie.
This was one of those books that went around my class at school and I still have it.
Posted by Jack at 23:30 1 comment: 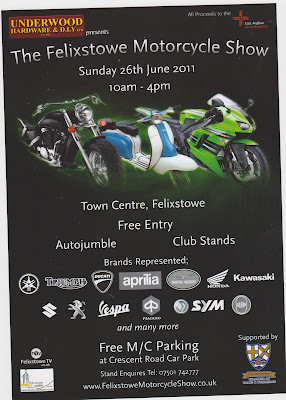 What a weekend coming up.
Saturday sees the scooters coming down to the beach followed, on Sunday, by the motorbikes. A touch of deja vu here but Brighton it is not.
Friday and Saturday the 24th and 25th June sees the Coasters Scooter Club celebrate it's 50th Anniversary at Trimley social club. Money raised goes to the Air Ambulance.
Formed back in 1961 as the Felixstowe and District Scooter Club they can be found holding court every Wednesday at The Steam Boat Tavern in Ipswich, Suffolk.
Live bands and DJs will supply entertainment and there will be a ride out to Felixstowe on the Saturday morning.

Then on Sunday 26th June Hamilton Road in Felixstowe plays host to the second Motorcycle Show. There will be a ride in from Stonham Barns near Stowmarket to raise money for St.Elizabeth Hospice.

Both events will have stalls and autojumble.
Posted by Jack at 19:41 No comments:

In 1967 Adam Diment was about to rewrite spy fiction.
There had been many contenders for Ian Fleming's and James Bond's throne. 'Boysie' Oakes in John Gardner's 'The Liquidator' (Gardner would take over the Bond franchise) and Doctor Jason Love in 'Passport To Oblivion' (filmed as 'Where The Spies Are'). Add to the list John Sanders with Nicholas Pym, the 'James Bond' of Oliver Cromwell's Secret Service.

So, enter Philip McAlpine. Tall, good looking and a love of fast cars, fast living, pot, sex and all manner of things mod. Truly a sixties child.
Suddenly his creator, Adam Diment, was the 'big thing'. Both he and his creation were hailed as the true successors to Fleming and Bond.

'The Dolly Dolly Spy' is told in the first person and appears to be a slow starter. McAlpine is coerced into working for British Intelligence department 6(NC/NAC) by the head Rupert Quine who is nothing like M. Quine is camp and prone to calling people 'luv' but this is just window dressing for a man who has a nasty, sadistic streak and can resort to blackmail with a smile on his face.
Recruited McAlpine is sent to work for the International Charter Inc a company that British Intelligence are interested in. On the surface the company runs package holidays for tourists to the Mediterranean island of Dathos. Underneath there is gunrunning and other clandestine activities going on. As a perk for this McAlpine is well paid and has the privelege of having his girlfriend, Veronica, live with him.
But the easy living comes to an end when he has to start earning his money and has to kidnap a former member of the Waffen SS. The only trouble is that the Americans want him too and McAlpine is not a subscriber to any 'special relationships'.

What makes 'The Dolly Dolly Spy' stand out from the crowd is Adam Diment's delivery. His hero says exactly what he thinks and that goes all the way to make McAlpine real - like you were reading an autobiography.
There were three more books 'The Great Spy Race', 'The Bang Bang Birds' and 'Think,Inc' the latter in 1971 after a gap of three years. But that was the end as Adam Diment just disappeared from the scene.

There was talk of a movie with David Hemmings but it came to nothing. Though, I do wonder if the McAlpine novels insired Austin Powers though that character does not compare.

If you liked Bond, then you will like McAlpine.
Posted by Jack at 12:00 No comments: 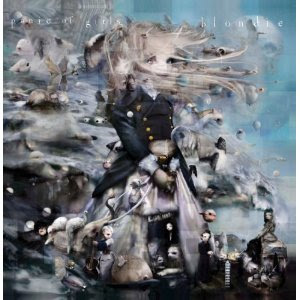 This is something of a first - being able to review a CD before it's commercial release.
It has been eight years since the release of 'The Curse Of Blondie' and still Blondie moves on with a kind of re-invention. The Blondie style is always there flipping through trends and styles and mixing it all up.
The opening track 'D-Day' is all that. Not the usual toe-tapping, pop arty single type opener but something dark and brooding that creeps up on you.
And anyone could mistake 'What I Heard' as the next in line as the sure fire hit single.
'Mother' was the actual single release. On the surface it is about a club the Debbie Harry frequented called Mother. Dig a little deeper into the lyrics and it turns into what you want it to be.
As I have said all the Blondie styles are there including a touch of Reggae - 'Girlie Girlie' for example.
Although this is a CD of new material there are some tracks that have been around for a while as part of Blondie's live gigs.
All in all I enjoyed the 'Panic Of Girls' CD - but then I am biased as I like Blondie and Debbie Harry (er - singing solo - I mean).
Blondie's 'Panic Of Girls' is released on the 4th July next.
Posted by Jack at 00:20 No comments: 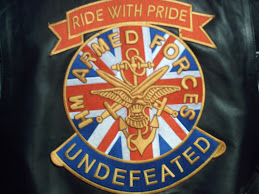 Jack
We are related but a generation separates us. We're both Londoners. We are both writers - the youngest having her first piece published at the age of 16 (just two years ago).